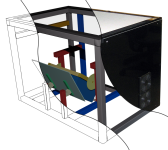 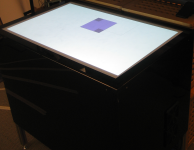 This multi-touch table I built as a research platform is based on a diffused illumination approach:

UPDATE I: I am now using a diffused surface illumination (DSI) setup. The table’s basic design did not change. Only the actual surface was replaced by an EndLighten acrylic sheet with a rear-projection acrylic sheet on top. An IR LED ribbon around the EndLighten sheet is now responsible for illumination, resulting in a more uniform light distribution and easier setup.

UPDATE II: Instead of the rear-projection acrylic sheet, I created a compliant surface, i.e. using a combined DSI/FTIR approach.

UPDATE III: I build a portable FTIR table for travelling.

A detailed description of this setup including further pictures, engineering drawings, and parts lists is available as technical report. The guys at AmiLab (Universidad Autónoma de Madrid) built their table (additional pictures) using these plans as guide; also check out their Flash Library for Interpreting Natural Gestures.