Looking for an affordable solution to stream Internet radio to my stereo system, I decided for Apple’s second generation TV plattform (i.e., the black box, or ATV2). During a quick research, it seemed that Apple TV meets my needs:

After all, Apple summarises my core request spot on: “And listen to Internet radio through your home speakers.” In particular, I am looking for a solution that works without a TV. Given Apple TV’s features of digital audio out, Wifi connectivity, and various remote control options, I was confident in my choice.

The first thing I realised is that a TV (connected via HDMI) is required for initially setting up the Apple TV. This is acceptable, and after entering Wifi and Apple ID credentials the device was quickly ready to be used and could output sound  also with the TV disconnected.

With delight I discovered the menu entry “Radio” (with the TV connected, of course). While it contains a vast number of pre-defined radio stations, the user cannot edit it. In other words: If a radio station is not in there by default, it seems to be impossible to add it manually. 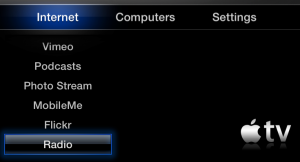 The next problem is that, even if the radio station of choice was included here, it can only be selected through the user interface of a connected TV set. Blindly navigating with the IR remote is certainly not an option. And Apple Remote for iPhone basically replicates the IR remote only. It does not show the Apple TV’s user interface. 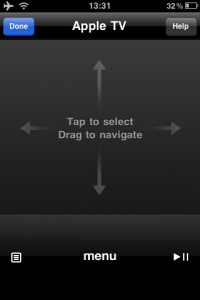 If iTunes is running on a computer in the network, you can use Apple Remote (e.g., on your iPhone) to play a radio stream contained in the iTunes library redirected via AirPlay to the Apple TV (without the need of a connected TV set). Of course, being in front of the computer, you can directly select Air Play from within iTunes, too. But: a device in addition to the Apple TV is required, namely a computer running iTunes. This is contrary to my goal of listening to Internet radio on a stand-alone device.

A great software for the iPhone is TuneIn Radio. It allows to directly stream any Internet radio station from the iPhone to the Apple TV via AirPlay. This comes close to my dream setup. But: the iPhone needs to be constantly receiving the stream and forwarding it to the Apple TV, thus depleting its battery quickly. While it would be technically straight forward to forward the stream’s URL to the Apple TV and let it receive the stream on its own directly, this does not seem to be possible. 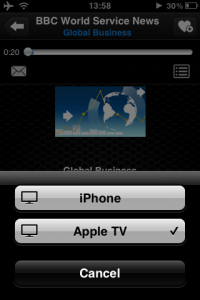 Jailbreaking the Apple TV is straight forward using Seas0nPass and allows for installing third-party applications (best to start with NitoTV which allows to install further applications from a menu). There are two remote client applications for the Apple TV: Rowmote (Pro) and Remote HD. While in both cases the software clients on the Apple TV come for free, the corresponding iPhone apps do not.

From what I can tell by looking at product descriptions, screenshots, and YouTube videos, Rowmote is basically offers basically the same functionalities as Apple Remote does. Remote HD, however, seems to additionally offer replicating Apple TV’s interface on the iPhone (like VNC). In doing so, no TV set is required to navigate through menus. One problem remains, though: there is no way to add custom radio station to Apple TV’s default interface. 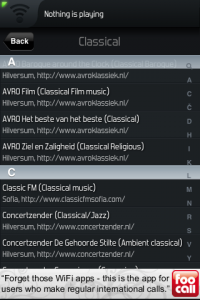 But there are further plugins available after a jailbreak, for example XMBC, a free entertainment hub. Among other great features, XMBC allows to add Internet radio stations and can be controlled via dedicated iPhone apps (e.g., XBMoteC or  SoulMote). XBMC Constellations is an especially interesting iPhone app as it features its own radio directories on the phone. Therefore, there is no need to manually add radio stations to the Apple TV beforehand. XMBC can be started automatically (i.e., instead of Frontrow). Alternatively, NitoTV allows to install a VNC server on the Apple TV to connect from the iPhone and start XBMC if it stopped running.

The best (free) solution to play arbitrary Internet radio streams on the Apple TV without having a TV set connected seems to be (for now):

A good but non-free alternative might be Remote HD with integrated VNC and XBMC control.

Still, I find this is a lot of hassle to go through for doing something which should be possible out-of-the-box. In particular, …

Please feel free to add your comments and thoughts – and let me know if you find easier ways to make the Apple TV play Internet radio streams.

5 thoughts on “Internet Radio Streaming on Apple TV 2 – Why so Complicated?”