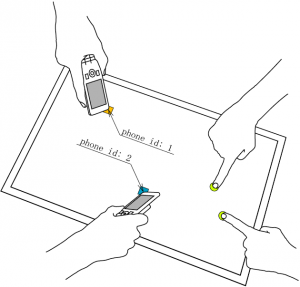 PhoneTouch is a novel technique for integration of mobile phones and interactive surfaces. The technique enables use of phones to select targets on the surface by direct touch, facilitating for instance pick&drop-style transfer of objects between phone and surface. The technique is based on separate detection of phone touch events by the surface, which determines location of the touch, and by the phone, which contributes device identity. The device-level observations are merged based on correlation in time. We describe a proof-of-concept implementation of the technique, using vision for touch detection on the surface (including discrimination of finger versus phone touch) and acceleration features for detection by the phone.